It is still early days for SDN. Cloud-hosted control planes are being deployed in production networks, but we are only just starting to see SDN being trialed in access networks and programmable pipelines being used to introduce new data plane functionality. As the technology matures and the APIs stabilize we expect to see increased adoption, but it may be new use cases still on the horizon that have the biggest impact on the role SDN eventually plays. This chapter looks at two promising examples.

Networks are notoriously difficult to make verifiably robust and secure against failures, attacks, and configuration mistakes. Despite progress on application-level security, little has been done to address the security and robustness of the underlying network infrastructure. And despite progress making computer networks more programmable, most networks are still built using closed/proprietary software and complex/fixed-function hardware, whose correctness is hard to prove and whose design has unknown provenance.

The emergence of 5G networks and applications will only exacerbate the situation. 5G networks will connect not only smart phones and people, but also everything from doorbells, to lights, refrigerators, self-driving cars, and drones. If we cannot secure these networks, the risk of cyber disasters is much worse than anything experienced to date.

The most critical capability for securing the Internet is verifiability: the ability to ensure that every packet in the network follows an operator-specified path and encounters only a set of forwarding rules within every device that the operator intended. Nothing more and nothing less.

Experience has shown that verification works best in settings where the overall system is constructed in a compositional (i.e., disaggregated) manner. Being able to reason about small pieces makes verification tractable, and the reasoning needed to stitch the components together into the composite system can also lead to insights. With disaggregation as the foundation, verifiability follows from (a) the ability to state intent, and (b) the ability to observe behavior at fine granularity and in real-time. This is exactly the value SDN brings to the table, which leads to optimism that verifiable closed-loop control is now within reach.

Figure 39 illustrates the basic idea. The software stack described in this book is augmented with the measurement, code generation, and verification elements needed for verifiable closed-loop control. Fine-grained measurements can be implemented using INT (Inband Network Telemetry), which allows every packet to be stamped by the forwarding elements to indicate the path it took, the queueing delay it experienced, and the rules it matched. These measurements can then be analyzed and fed back into code generation and formal verification tools. This closed loop complements the intrinsic value of disaggregation, which makes it possible to reason about correctness-by-construction.

The approach to verifying networks described in this section is similar to the one used in chip design. At the top is a behavioral model; then at the register-transfer level is a Verilog or VHDL model; and eventually at the bottom are transistors, polygons and metal. Tools are used to formally verify correctness across each boundary and abstraction level.

This is a model for what we are talking about here: Verifying across boundaries in a top-down design approach. This is made possible by the new SDN interfaces and abstractions defined by the software stack, which extends all the way to the programmable forwarding pipelines provided by the switching chip.

As experience with hardware verification demonstrates, this approach works best in composed systems, where each minimal component can be verified or reliably tested on its own. Formal tools are then applied as components are composed at layer boundaries.

The goal is to enable network operators to specify a network’s behavior top-down, and then verifying the correctness across each interface. At the lowest level, P4 programs specify how packets are processed; these programs are compiled to run on the forwarding plane elements. Such an approach represents a fundamental new capability that has not been possible in conventional designs, based on two key insights.

First, while network control planes are inherently complicated, a P4 data plane captures ground truth for the network—i.e., how it forwards packets—and is therefore an attractive platform for deploying verification technologies. By observing and then validating behavior at the data plane level, it is possible to reduce the trusted computing base: the switch operating system, driver, and other low-level components do not need to be trusted. Moreover, whereas the control plane tends to be written in a general-purpose language and is correspondingly complex, the data plane is necessarily simple: it is ultimately compiled to an efficient, feed-forward pipeline architecture with simple data types and limited state. While verifying general-purpose software is impossible in the general case, data plane verification is both powerful and practical.

This claim of practicality is grounded in the current state-of-the-art. Once the forwarding behavior is defined and known, then forwarding table state defines forwarding behavior. For example, if everything is known to be IPv4 forwarded, then the forwarding table state in all routers is enough to define the network behavior. This idea has been reduced to practice by techniques like Veriflow and Header Space Analysis (HSA), and is now available commercially. Knowing that this state is enough to verify networks with fixed forwarding behavior means that we are “merely” adding one new degree-of-freedom: allowing the network operator to program the forwarding behavior (and evolve it over time) using P4. The use of P4 to program the data plane is key: the language carefully excludes features such as loops and pointer-based data structures, which typically make analysis impractical. To read more about the opportunity, we recommend a paper by Jed Liu and colleagues.

The second insight is that, in addition to building tools for analyzing network programs, it is important to also develop technologies that provide higher levels of assurance through defense-in-depth. This addresses one of the main weaknesses of current approaches to network verification—they are based on mathematical models of the network components, and therefore can produce incorrect answers when those components behave in different ways than are captured in the model. By exploiting the ability of P4 data planes to collect rich telemetry and other monitoring data, it is possible to develop network verification tools that combine statically-verified components with runtime verification.

Figure 40. Projecting into the future, with Phase 3 of SDN focusing on verifiable, top-down control of network behavior.

To put this all in an historical context, Section 1.3 suggests we are now in the second phase of SDN. Figure 40 extends this into the future with a third phase, during which verifiable closed loop control will empower network operators to take full ownership of the software that defines their networks. This gives network owners the ability to tailor their networks in ways that differentiate them from their competitors.

Much of the early hype surrounding 5G is about the increase in bandwidth it brings, but 5G’s promise is mostly about the transition from a single access service (broadband connectivity) to a richer collection of edge services and devices, including support for immersive user interfaces (e.g., AR/VR), mission-critical applications (e.g., public safety, autonomous vehicles), and the Internet-of-Things (IoT). Many of these new applications will be feasible only if SDN principles are applied to the Radio Access Network (RAN), resulting in increased feature velocity. Because of this, mobile network operators are working to make Software-Defined RAN (SD-RAN) happen.

To understand SD-RAN at a technical level, it is important to recognize that the base stations that make up the RAN are, for all practical purposes, packet forwarders. The set of base stations in a given geographic area coordinate with each other to allocate the shared—and extremely scarce—radio spectrum. They make hand-off decisions, decide to jointly serve a given user (think of this as a RAN variant of link aggregation), and make packet scheduling decisions based on the observed signal quality. Today these are purely local decisions, but transforming it into a global optimization problem is in SDN’s wheelhouse.

The idea of SD-RAN is for each base station to report locally collected statistics about radio transmission quality back to a central SDN controller, which combines information from a set of base stations to construct a global view of how the radio spectrum is being utilized. A suite of control applications—for example, one focused on handoffs, one focused on link aggregation, one focused on load balancing, and one focused on frequency management—can then use this information to make globally optimal decisions, and push control instructions back to the individual base stations. These control instructions are not at the granularity of scheduling individual segments for transmission (i.e., there is still a real-time scheduler on each base station, just as an SDN-controlled ethernet switch still has a local packet scheduler), but they do exert near real-time control over the base stations, with control loops measured in less than ten milliseconds. 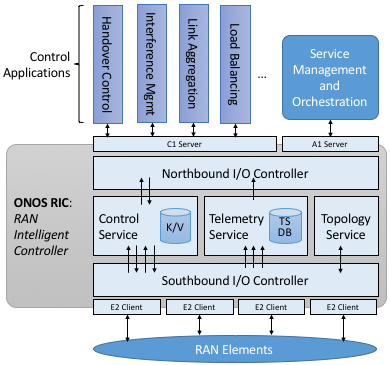 Like the verified closed-loop control example, the scenario just described is within reach, with a retargeting of ONOS at the SD-RAN use case already underway. Figure 41 shows the design, which introduces some new components, but largely builds on the existing ONOS architecture. In some cases, the changes are superficial. For example, ONOS adopts terminology coming out of the 3GPP and O-RAN standardization bodies,[1] most notably, that the NOS is called a RAN Intelligent Controller (RIC). In other cases, it’s a matter of adopting standardized interfaces: the C1 interface by which control applications communicate with the RIC, the A1 interface by which the operator configures the RAN, and the E2 interface by which the RIC communicates with the underlying RAN elements. The details of these interfaces is beyond the scope of this book, but the important takeaway for our purposes is that they are no different than supporting any other standard north- and south-facing interface (e.g., gNMI, gNOI, OpenFlow).

The ONOS-based RIC takes advantage of the Topology Service described in Chapter 6, but it also introduces two new services: Control and Telemetry. The Control Service, which builds on the Atomix key/value store, manages the control state for all the base stations and user devices, including which base station is serving each user device, as well as the set of “potential links” that could connect the device. The Telemetry Service, which builds on a Time Series Database (TSDB), tracks all the link quality information being reported back by the RAN elements. Various of the control applications then analyze this data to make informed decisions about how the RAN can best meet its data delivery objectives.

For a broad introduction into what’s involved in disaggregating 5G mobile networks so they can be implemented in software, we recommend the following companion book.

Finally, circling back to the previous section, applying closed-loop verification to a disaggregated and software-defined cellular network is the next obvious thing to do.